I came across this footage through the independent production company FSP Media. The Rocklive Show aired from 1990 – 1995 and was directed and produced by Fil Sibley. Show # 27 featured an interview with Possum Dixon before the music video for Watch The Girl Destroy Me.

Dirty Laundry interviewing Rob Zabrecky about his musical influences, the benefit concert for Lutefisk, his time with Possum Dixon, how Baltimore + John Waters + heat from the sun is the reason for Zabrecky becoming a magician and dont forget the story about Michael Jackson.

Compilation of  flyers, press clippings and photographs. Music: In Buildings from the debut album.

I´ve never seen any music videos from the last studio album New Sheets (1998). The only footage out there is this promo video made by Interscope records. To me it looks like Interscope just put the audio for the new song over some old live footage when the band played a different song. 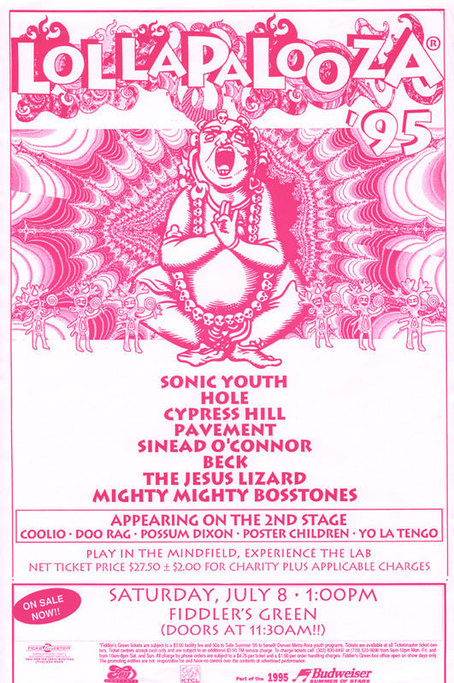 “The crowd was small, but receptive. Then, Possum Dixon goes on the stage, and a crowd gets larger. In fact, the crowd starts moshing!! I’ve never seen a pit for Possum Dixon, yet. The audience, crammed in front of their metal gate, roared after each song. Possum Dixon’s music is pretty straight-forward, and they all look like movie stars, but they put on a very good show, and the audience loved them! It was really nice to see a band get such a great response!”

And here’s a short glimpse into backstage mingling:

“I don’t think David Yow looks very happy,” Rick said. I stared worriedly at Yow slumped in the corner with his back turned away from everyone while one of the movie-star-Possum Dixon guys, sitting next to Georgia, talked at us for a half an hour about David Yow throwing beer bottles at him during an interview today (making me feel even worse for Yow), something about Yow yelling during the interview that he wanted to “Fuck Sinead O’ Connor” (we laughed about this) and a couple of other sexual references, more beer bottles being flung at him by Yow, and the interviewer deciding to end the interview prematurely.”

The New York Times summary of what went down on the 2nd Stage when Lollapalooza played Gorge Amphitheater July 4:

“Poster Children and Yo La Tengo, both college-circuit regulars since the 1980’s, showed the benefits of experience in their second-stage sets. Poster Children played fierce, tuneful punk-rock and Yo La Tengo moved from terse songs to tumultuous jamming. Possum Dixon, which released its first album last year, updated 1980’s new-wave rock for tales of suburban surrealism. Doo Rag, an ersatz blues band, and Blowhole, a free-improvisation rock band, also performed on the second stage. A different second-stage lineup is scheduled when the tour reaches New York on July 28 at Downing Stadium on Randalls Island.”

Interview of Possum Dixon at the Lollapalooza Festival.

They where booked to perform on the 2nd Stage with Poster Children, Doo Rag, Coolio, Yo La Tengo and Blowhole.